Is studying in US safe

With the recent killings at well known universities like ILLINOIS ,VIRGINIA TECH by the demented students of the respective universties,studying in the U.S has now become very questionable.There has been a fear induced in the minds of the people especially students coming from other countries with regard to their security.Its high time the local government in every state of the U.S provide maximum secuirity to these foreign students because the no is massive(close to 6-8 lakhs of Indian students pursue their higher education every year).There must also be some kind of movement to build awareness regarding this issue and its high time the concerned authorities take necessary steps to safeguard the interests of these students and make them feel more secure.
Posted by RAZOR at 1/18/2008 05:46:00 AM No comments:

Species of orchid or any other plant ,flower can look the same but can be genetically different.Scientists have developed a "barcode" gene that can be used to distinguish between the majority of plant species has been identified.This gene can be used to catalogue plant life as it has a slightly different code between species but is nearly identical within a species. Species that look the same to the human eye can be told apart with a small leaf sample. DNA barcoding is already a very well-established technique in animals.
Posted by RAZOR at 1/18/2008 05:02:00 AM No comments: 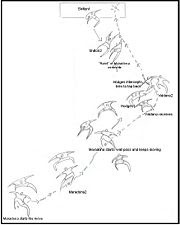 The Hand of God goal (Spanish: Mano de Dios) was scored as the result of an illegal (but unpenalized) handball by Diego Maradona in the quarter-final match of the 1986 FIFA World Cup England and Argentina, played on 22 June 1986 in Mexico City's Estadio Azteca. Argentina won 2–1 and for some English people the legacy of this event perhaps best symbolizes the rivalry between the two teams, and is usually mentioned whenever the two sides meet.
Goal
Six minutes into the second half, the score was 0–0. Maradona cut inside from the right flank and played a diagonal low pass to the edge of the area to teammate Jorge Valdano and continued his run in the hope of a one-two movement. Maradona's pass, however, was played slightly behind Valdano and reached England's Steve Hodge, the left-midfielder who had dropped back to defend.
Hodge (who swapped shirts with Maradona after the game) tried to hook the ball clear but miscued it. The ball screwed off his foot and into the penalty area, toward Maradona, who had continued his run. England goalkeeper Peter Shilton duly came out of his goal to punch the ball clear, with his considerable height (6'1" or 185cm) making him clear favourite to beat Maradona (5'5" or 165cm) to it. However, Maradona reached it first—with the outside of his left fist. The ball went into the goal, and the referee, (Tunisian Ali Bin Nasser), not having seen the infringement, allowed the goal. Many people, including Shilton, did not initially realize it was a handball. Some television commentators thought the objections of the English defenders were claims for offside (Maradona could not have been offside because the previous touch was by an England player), and it was only clear from other camera angles—not the original one—that there had been an offence.
The Argentine players and fans celebrated (video shows Maradona looking toward the referee; he later said "I was waiting for my teammates to embrace me, and no one came . . . I told them, 'Come hug me, or the referee isn't going to allow it.While the English players protested to no avail.
Incidents of players seeking to gain an advantage by skirting the laws of the game, in the hope that the referee does not see, are common. This incident has derived its notoriety largely from the importance and closeness of the match, the animosity between the nations, and the responses of Maradona and the English media.
Video of the Hand of God goal from YouTube
Posted by RAZOR at 1/18/2008 04:25:00 AM No comments:

The "Star Wars" universe, already substantially rendered by computer generated imagery, is giving in all the way to animation.George Lucas wanted to explore more "Star Wars" ideas. "The Clone Wars" is the result.
"Star Wars: The Clone Wars," an animated film, will open in theaters August 15 and be followed by a TV series of the same name, to air on the Cartoon Network and TNT this fall.
"I felt there were a lot more 'Star Wars' stories left to tell," said "Star Wars" creator George Lucas in a statement. "I was eager to start telling some of them through animation and, at the same time, push the animation forward."Produced by Lucasfilm Animation, both the film and TV show will be distributed through Time Warner Inc., which owns TNT, the Cartoon Network and the film's distributor, Warner Bros. (Time Warner is also the parent company of CNN.)
Lucas, who serves as executive producer, is also planning a live-action television series spinoff of the franchise, which he began working on last fall. The animated series has long been in the works, though the theatrical release was only announced late Tuesday.
The movie and subsequent series takes place between the ground covered in episodes II and III of the "Star Wars" films: "Attack of the Clones" (2002) and "Revenge of the Sith" (2005). It will include cartoon versions of many familiar characters, including Anakin Skywalker, Obi-Wan Kenobi, Padme Amidala and General Grievous.
A new character named Ahsoka, Anakin's padawan, will be the first female Jedi to be a character of focus.
"It turned out to be an idea that George wanted to explore," said Dave Filoni, director of the "Clone Wars" movie and supervising director of the series. "Henry Gillroy (a writer on the series) and I very much wanted to have a female Jedi in more of a lead role because you've had all the boys."More than 30 episodes are planned, though Filoni declined to say exactly how long the show will run. He acknowledged it's a finite timeline before encroaching on "Revenge of the Sith" story lines.
Though the "Star Wars" films have been extraordinarily lucrative, the force won't be expected to be as strong in cartoon form. The film and series are clearly aimed at younger viewers, though Filoni hopes to also entice the many "Star Wars" die-hard fans.
"An animated series always appeals more to a younger audience," said Filoni. "But at the same time, we've tried to do some sophisticated things and ensure that we are going to satisfy the broad spectrum of 'Star Wars' fans."
Though Lucas farms out various "Star Wars" projects in what's known as the " 'Star Wars' expanded universe," Filoni says that Lucas ensured "The Clone Wars" has "that 'Star Wars' feeling."
Fans will also remember other animated series following the first time Lucas completed a "Star Wars" trilogy. After "Return of the Jedi," the series "Ewoks" and "Droids" ran in the late '80s.
Posted by RAZOR at 1/17/2008 01:12:00 AM No comments:

Rick Dockery was the third-string quarterback for the Cleveland Browns. In the AFC Championship game against Denver, to the surprise and dismay of virtually everyone, Rick actually got into the game. With a 17-point lead and just minutes to go, Rick provided what was arguably the worst single performance in the history of the NFL. Overnight, he became a national laughingstock and, of course, was immediately cut by the Browns and shunned by all other teams. But all Rick knows is football, and he insists that his agent, Arnie, find a team that needs him. Against enormous odds Arnie finally locates just such a team and informs Rick that, miraculously, he can in fact now be a "starting "quarterback. Great, says Rick— for which team? The mighty Panthers of Parma, Italy. Yes, Italians do play American football, to one degree or another, and the Parma Panthers desperately want a former NFL player— any former NFL player— at their helm. So Rick reluctantly agrees to play for the Panthers— at least until a better offer comes along— and heads off to Italy. He knows nothing about Parma— not even where it is— has never been to Europe, and doesn’ t speak or understand a word of Italian. To say that Italy— the land of opera, fine wines, extremely small cars, romance, and Football Americano — holds a few surprises for Rick Dockery would be something of an understatement.
Posted by RAZOR at 1/15/2008 01:36:00 AM No comments:

Kamal Haasan’s ‘Dasavatharam’ has hit headlines for various reasons like the budget,star cast or its release. This time around it is under the focus for a special guest all the way from Japan! 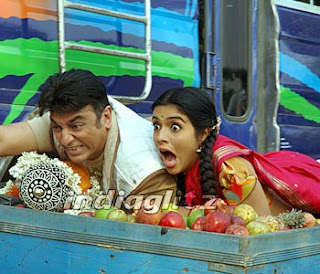 ‘Dasavatharam’ is a big budget film in Kollywood, which should be releasing this April. Though the production part of the film was wrapped up last year in December itself, much time is being taking to complete the back ground music score and the post-production work.
The Tamil film industry is abuzz with news that the music launch of this film might take place in the month of March this year. Oscar films is producing this much-awaited flick, there has been news floating around that the chief guest for the music launch will be none other than Jackie Chan himself. Sony has obtained the copy rights for the songs of ‘Dasavatharam’ and around two lakh CDs are to be released into the market. The price of one CD is said to be somewhere around Rs. 100/which makes it the ‘most’ costliest music CD in Tamil industry.
It seems like the 'Dasavatharam' team will settle for nothing but the best!
Posted by RAZOR at 1/15/2008 12:29:00 AM No comments:

Check this video out. It shows a man running faster than the fastest car in the world.
The choice is yours and yours alone to believe.

Did You Know? Valentine Day Special